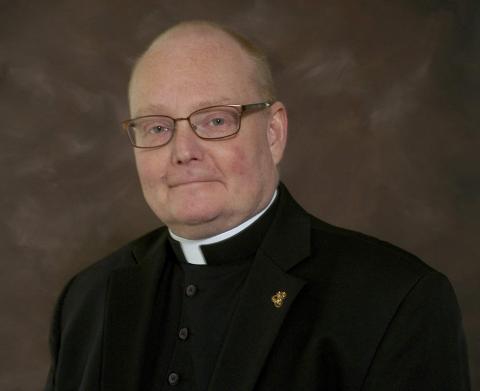 Father Rich was raised in Bally, PA. He received his undergraduate degrees in Theology/Philosophy and Elementary Education from Alvernia College in Reading. After graduating from college, he taught fifth grade at our own Saint Francis of Assisi School for one year before entering the seminary 35 years ago. Father Rich began his studies at Mary Immaculate Seminary in Northampton and within the first year he was back at Saint Francis as a seminarian for one semester doing parish visitation.  When Mary Immaculate closed, Father was transferred to Saint Charles Seminary in Philadelphia.

Ordained on June 6, 1992, at the Cathedral of Saint Catharine of Siena, Father Rich was assigned Associate Pastor at Notre Dame of Bethlehem Parish and then Saint Ignatius Loyola, Sinking Spring.  After five years in parish ministry, Bishop Welsh asked him to serve as Director of Spiritual Activities and Professor at Saint Pius X High School, Bangor for a year and then Marian Catholic High School, Tamaqua for two years. Following that, Father Rich went back into parish ministry as Associate Pastor at Sacred Heart, West Reading, Saint Patrick, Pottsville, Saint Ann, Emmaus and Our Lady of Perpetual Help, Bethlehem.

Father Rich’s first Pastorate gave him three parishes in Schuylkill County: Annunciation BVM, Shenandoah, Saint Mary, Ringtown and Saint Mary Magdalene, Lost Creek.  A year later, Ringtown was taken away from Father and two other parishes in Shenandoah were given to him: Saint George and Our Lady of Mount Carmel.  Father Rich’s second Pastorate made him the founding Pastor of the Church of All Saints in McAdoo, which was a consolidation of six parishes: Saint Patrick, Saint Kunegunda, and Saint Mary, all in McAdoo, Saint Michael and Saint Bartholomew, both in Tresckow and Immaculate Conception in Kelayres.  Later, he served as Parish Administrator for Saint Joseph, Sheppton and his former parish of Saint Mary, Ringtown.  In 2011, Father Rich was assigned as Catholic Campus Minister for Kutztown University and Albright College, Reading. During COVID and after nine years at Kutztown, he was made Administrator of Our Lady Help of Christians, Allentown.

On November 21, 2021, Father Rich was installed as the eighth Pastor of Saint Francis of Assisi by Reverend Eugene Ritz, Chancellor for the Diocese of Allentown.  Father’s mother, Barbara Yost, is a member of Most Blessed Sacrament, Bally and his father, Charles, suffers from dementia and resides in a memory care facility.  In his spare time, Father Rich enjoys spending time with PJ, his Miniature Schnauzer, reading, cooking, playing crokinole and the company of friends.