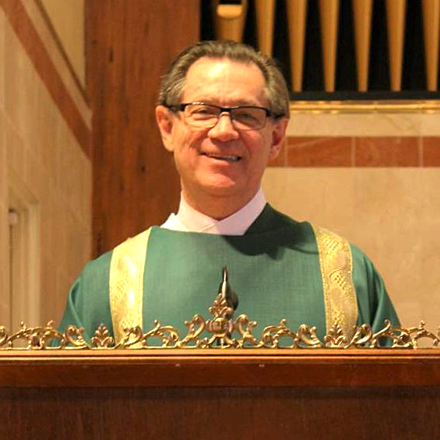 Bob and JoAnne, his wife since 1970, both hail from the western suburbs of Philadelphia. It was a new career that brought them north in the early 70s, where they raised their children: Thomas, Theresa, and Jordan. Today they own and operate the oldest and largest flooring store in Bethlehem, Bethlehem Gallery of Floors. Here they preside over daily operations with their sons, Tom and Jordan, and the rest of their staff. Throughout their 30+ years at the helm, they have received numerous retailer awards for their business achievements. Their daughter, Terri, lives north of Baltimore and works at John Hopkins Hospital as a licensed clinical supervisor in their out-patient mental health program. They also have eight grandchildren.

Bob completed his undergraduate studies in Business Management at Montgomery County Community College in 1971 and completed a 4-year home study program in Interior Design from Harcourt Learning in 1973. In 2001, he began his Theological Studies at Mary Immaculate Center in Northampton, culminating in Ordination to the Permanent Diaconate in the Diocese of Allentown in 2006. After ordination, he was assign by Bishop Edward Cullen to the parish of Saint Francis of Assisi in Allentown. At the parish, he presides as deacon of the Word and Cup for Mass, and officiates at baptisms, funerals, and weddings. His Eucharistic services also include Benediction for the Carmelite Monastery in Limeport as well as for the parish, Communion for the homebound and various facilities, and a first Friday Pro-life Holy Hour. He directs the annual “Day of Recollection” retreat for the Men of Saint Francis. He is always prepared to serve anywhere in the diocese at the request of the Bishop or a friend in need.

Outside his ministry at Saint Francis, he enjoys his very active memberships in Our Lady’s Missionaries of the Eucharist (a Public Association of Christ’s Faithful), the Catholic Business Owners Alliance (a newly formed group by Bishop Barres to formulate the Good News of Jesus Christ into their business), the Bethlehem Rotary, Lehigh Valley Chamber of Commerce, and as a member of the Saint John Vianney Regional School board. He is a former member of the boards for Dream Come True and Musikfest.

Bob and JoAnne have recently downsized their lives and currently live under the peaceful elms and sycamores of the west side of Allentown, where they spend as much time as possible spoiling their grandchildren. Bob is an avid gardener and reader, loves anything about Abraham Lincoln & the Civil War era, and, in recent years, has begun to re-read many of the old classics he enjoyed as a young man.