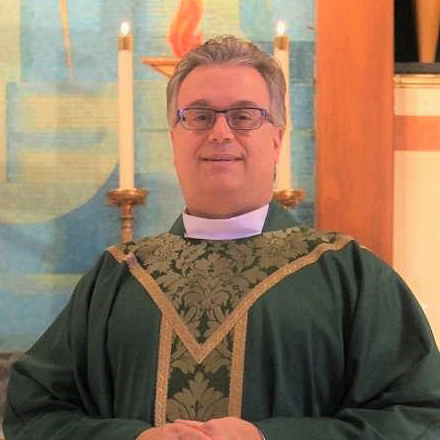 Monsignor Finelli was born on July 11th in Easton, Pennsylvania to Mary (Cozzubbo) and Victor Finelli. He has an older brother, Michael, married to Leila. They have two girls. His younger brother, Phil, married to Jessica, have five children.

Monsignor Finelli attended public school graduating from Easton Area High School in 1981. Although from the age of five he knew he wanted to be Priest, he didn’t immediately go into the seminary. He first attend Northampton County Area Community College where he received his degree in Business Administration. Upon completion there he applied to the seminary for studies for the Diocese of Allentown. He attended DeSales University (then Allentown College) while living at the then Brisson Seminary. While at DeSales he completed his business degree and received a degree in philosophy. Upon graduating from DeSales he then attended Mary Immaculate Seminary, Northampton received a Master of Divinity Degree and a Masters of Theology degree. He was ordained a deacon by The Most Reverend Thomas J. Welsh on May 14, 1988. It was while he was a deacon that he began being a Master of Ceremonies for Bishop Welsh and all subsequent bishops. It’s a position he still maintains today. He was ordained a Priest on June 3, 1989 by Bishop Welsh.

Since Sacred Ordination he has had the following parish assignments: Our Lady Help of Christians, Allentown (1989-90), Our Lady of Perpetual Help, Bethlehem, (1990-1994), St. Elizabeth of Hungary, Whitehall (1995-2000), Saints Simon and Jude, Bethlehem (2000-2002), St. Francis of Assisi, Allentown (2002-2003). In 2003 he completed his licentiate degree in canon law graduating from the Catholic University of America. He then became a Judge on the Diocesan Tribunal while residing at St. Paul’s, Allentown. His first assignment as Pastor was to Assumption of the Blessed Virgin Mary (St. Mary’s), Catasauqua (2008-2011). He was assigned, again, to St. Francis of Assisi, Allentown, now as the Pastor in June of 2011. This is the third time that Monsignor Finelli has been with us at St. Francis: first as a seminarian in 1986, then as an assistant pastor, and now as our Pastor.